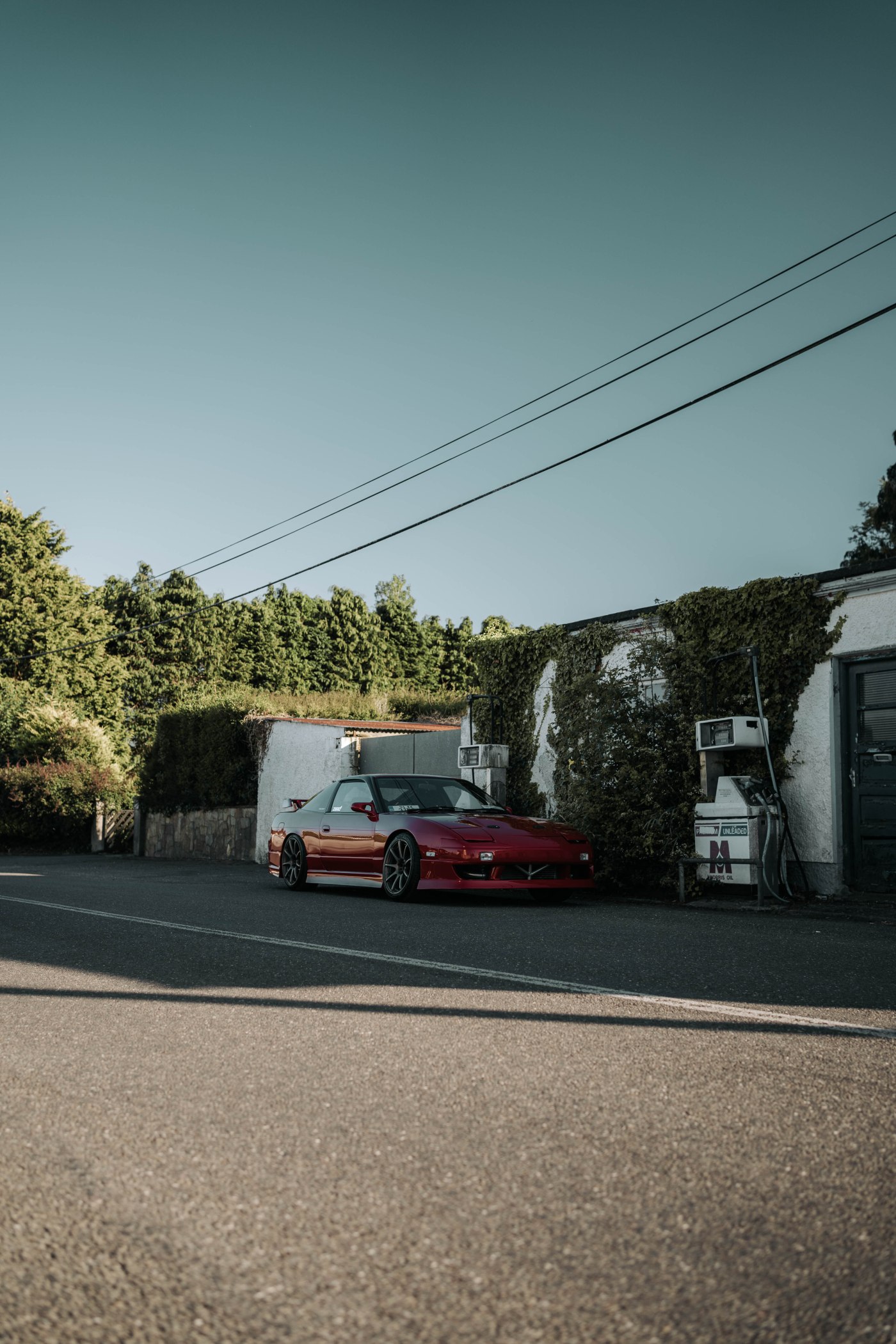 I’ve thought about this post for years. What would I say, what photos would I show, would I actually be happy with what was in front of me.

Its still very much surreal that this is my car as I took it out across the beautiful Copper Coast during the week to snap some photos on what was a glorious Summers evening. I had recently cycled through this little village and thought the abandoned old petrol pumps suited the 90s vibes of my SexyStyle wearing S-Chassis.

As you can see, its hard to capture the true colour of this car. Depending on the light, the Soul Red colour can go anywhere from a red-orange hue to almost a wine red. Something, I’m personally really happy with as this was something the old paint would often do as well.

You may well be unfamiliar with this car as its been a long time since I tore it apart with the idea of a one-to-two year ‘build’, just improving upon what was already a great base for what was going to be my dream 180sx.

I, as well as many others, soon found out that nothing about these cars is cheap anymore. The smallest of parts can send your bank balance into a spin and thats before the Irish government get their greasy paws on your tiny package and bend you over for the privilege of having to order parts from Japan. But, unhappy with the quality and price associated with the second hand market here in Ireland, I made the decision early on to buy as many new parts as possible from Nissan Japan, in the hopes that the little bit extra I’d have to pay would be worth it in the end (It was).

In many ways, I’m lucky that Nissan still produces a lot of parts for this chassis. Almost all gaskets, lights, garnishes and trims are still available, some of them for not nearly as much as some people would lead you to believe. A lot of these parts, including the upper door trims, kevlar garnish and wind deflectors wee all purchased new from Nissan Japan which led to myself and Fedex being on a first name basis. (If you’re ordering parts from the Motherland I’d highly recommend Nengun, they were mostly great to deal with).

The standout features for me on this car, paint aside, would have to be the bodykit and the rear wing. The bodykit is something I’ve made a big deal of in the past, a genuine SexyStyle item, was secured through the help of my good friend Daren Moynihan and Roughsmoke in Japan. I’m not saying this is definite but I’d highly doubt theres another one of these kits in Europe and ever since I saw it in some old Option videos, I had to have it.

The rear wing is a genuine fibreglass piece from G-Coroporation and is slightly taller and wider than a factory kouiki wing. Its subtle but gives the car just a bit more presence.

The interior hasnt changed too much, I’ve replaced the old battery with an odyssey race battery located behind the drivers seat. The whole rear is now painted silver to match the engine bay but given the fact I can hardly hear my new JBL speaker system due to a healthy mix of exhaust, gearbox and kaaz two-way noise, I’m probably going to look to obtain some rear carpet and plastics with some added sound deadening just so I can have a conversation on those longer trips to shows, trackdays or cars & coffee.

Some of you may have already seen this at our Cars & Coffee which we had a few weeks back and it was cool to see the reaction of a lot of people who have seen the car go through the whole process. Of course, I didn’t piece this car together for anyone else but myself and as someone said to me recently ‘Fuck what everyone else thinks, once you like the car thats what matters’. But, always good to see peoples reactions to something you’ve worked hard for.

Say a prayer for this as it goes through NCT as I’m writing this.