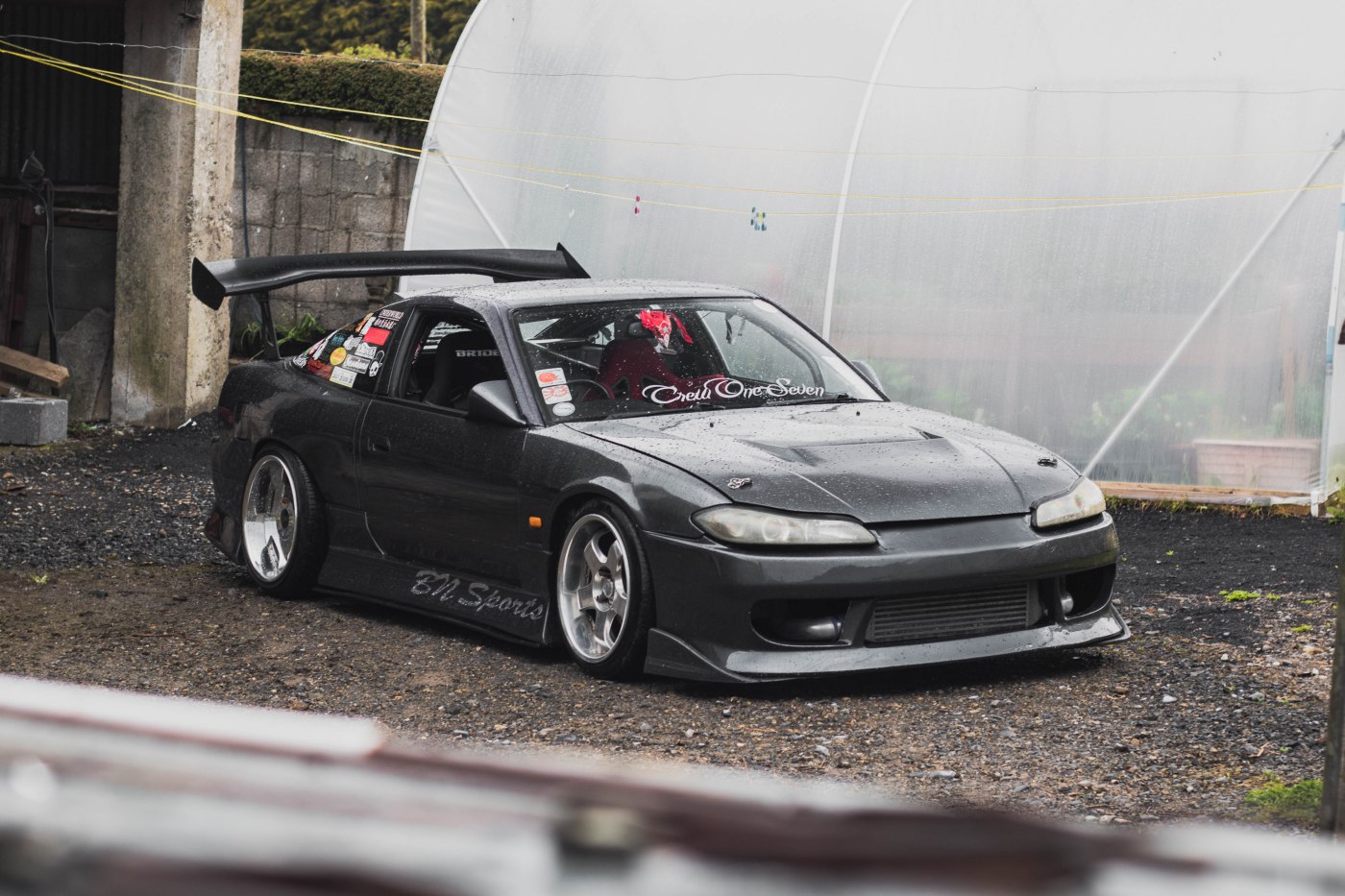 Its hard to think of a time that more encompasses a stereotypical Irish day than what I experienced a number of weeks ago when chance, bad weather and a little bit of luck from above gave me the opportunity to do what I do best, stand in random sheds around this tiny island taking mediocre photos and talking the face off someone I just met five minutes ago.

See, beginning to catch a glimpse of light at the end of what is a really long tunnel may bring out the hastiness in most people and I was no different when, having made a phone call to Dave at Hartley Autobody, I foolishly tricked myself into thinking that my S13 was nearly finished. Oh how wrong I was……

This residing longfullness to finish the car has, until the pandemic, brought me to all corners of the country in search of parts, both new & old and has put me in the company of some of my greatest inspirations and led me to meet some amazing people.

Having friends spread across this fine isle certainly has its advantages and whilst on the hunt for a number of exterior pieces, most notably a bonnet(hood) and two original steel front wings, I stumbled across a listing for such parts but unfortunately they were a 4 hour drive away(Thats a long way here).

Thankfully, my buddy Andrew(@andrewbzr) offered to go and collect the parts as he was looking to acquire some parts for his own 180sx. As many of the events I’d normally run into Andrew at were still postponed, I decided I’d make the spin to Mayo to pick up the parts and make a day of it as I was picking up a new front windscreen from Diarmaid(@Diarmaid_o) the same day.

We had spoke briefly about snapping some photos of his 180sx but unfortunately it was still at the dyno when I visited but Andrew had a couple of aces up his sleeve and said there were a number of cars within a short drive that I could potentially shoot.

Its fair to say the weather was piss-poor for the whole journey with torrential rain plagueing us all the way from Waterford meaning I had mentally written-off the possibility of shooting anything for the day. But Andrew being from somewhere where it seemingly never stops raining was undeterred and suggested we drive a couple towns over where there was an S15-fronted 180sx that we could grab some snaps of.

I’ve known of Noel for quite a while, his s-chassis has ocassionally presented itself on my Instagram feed over the last 3 or 4 years. Its hard to miss given the aggressive body styling, huge wing and chrome wheels that fill those fibreglass fenders.

Delighted that I could tell my grandmother that I was at the holy shrine of Knock(look it up if you’ve never heard of it), we plodded along in the south-eastern direction until we came to a quiet stretch of road with only a few houses on it and pulled up onto the side of the road(If you’ve never been to the west of Ireland it can be summed up in the following way: Scenery, green fields, sheep, holy shrine, rain).

We walked around the back of this very unassuming house where I stood into one of the coolest one-car sheds I’ve seen. The walls covered in wood with all sorts of memorabilia like t-shirts, Hot Wheels and various drifting/rallying collectibles. I just grabbed a couple phone pictures whilst it was under covers but I regret not snapping more of if it in this brilliant litte space.

Introductions and fist-bumps out of the way we discussed potential shooting locations to which I was greeted with ‘The uncle has a farmyard next door, I’ll go and ask him can we use it’. Brilliant, I thought, as I had images of a barn full of turf with a dog and some farm machinery. Well, thats pretty much what I got, except there was some rhubarb subbed in for the turf!

Okay so, location sorted, Noel fired up the car and its fair to say some of the pensioners two towns over heard it! Most likely the loudest s-chassis I’ve ever heard to still have a full exhaust on it. Positioning the car in the yard was a touch awkward given the ground was at a small slant so we tried to play the angles and I’m still not sure if they worked out but I’m really happy with some of these shots but feel free to let me know your thoughts!

Whilst it had cleared up long enough for us to position the car and pop the bonnet, the rain was soon upon us again and whilst ther guys decided to run for cover, I fired off a couple of shots in the heavy rain that were definitely worth getting, until I realised I had left my camera bag open.

Theres so many parts on this car that draw your eye, the Bomex mirrors, the rear wing or the wheels but for me the interior was what impressed me the most. The whole back of the car has been flattened out using plywood and this holds a battery box and a huge sub. Something I’d love to do with my own car down the line.

Something I didn’t think I’d be keen on was all the flocked interior pieces, until I saw it in real life but it adds a different take to the inside of the car especially with the fitted out woodwork thats also been covered in similar material to the OEM interior pieces.

Overall, the car just works as a whole, between the stickers, the beefed up body with the big wing to match. Still meeting new and amazing people, still inspired.